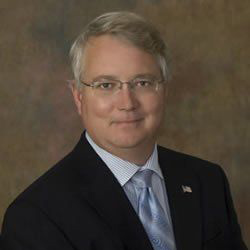 Dr. Sutton is a graduate of Eastern High School where he earned the rank of Lieutenant Colonel and served as the school’s first battalion commander of their Army ROTC unit. During this time, he started the school’s rifle team. After graduation, he attended the University of Kentucky in Lexington for pre-optometry / pre-med. During this time, he was a member of the University of Kentucky Rifle team, winning the SEC tournament in Fort Benning, GA his freshman year.

Dr. Sutton was accepted to the University of Houston, College of Optometry in the spring of 1979 and attended Optometry School for two years before dropping out to return to Lexington to attend medical school. Graduating in 1985, he moved to New Orleans and served as an intern in Internal Medicine at the Alton Ochsner Medical Foundation. Dr. Sutton served a three-year residency in Ophthalmology at the Louisiana State University School of Medicine, finishing in 1989. It was during this time that Dr. Sutton met his wife, Jane and they were married during his second year of eye training.

After graduation, Dr. Sutton studied advanced cataract techniques under his mentor, Dr. Dan Pope in Bradenton, FL. In the summer of 1990, Dr. Sutton moved to Ocean Springs, MS where he opened what is now known as Mississippi Eye Associates. Over the last 21 years, Dr. Sutton has built a Center of Excellence for Cataract Surgery and has performed over 15,000 cataract and implant surgeries. Since 2002, he has been serving as the Chairman of the Board for the Ocean Springs Outpatient and Endoscopy Center.